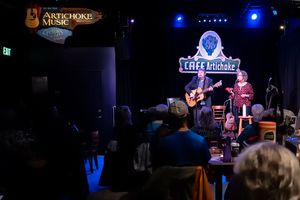 SOLD OUT. It had been almost two years since we were on a stage due to the pandemic. We got a phone call from our friends with the band Night Folk who wondered if we would like to split a performance date with them at Cafe Artichoke in Portland, OR... inside, but masked and vaxxed. As it turned out, we were just finishing the recording of a new EP (more on that later) and we thought it might be a good thing to actually play these new songs for some folks. The night of the show, doors opened and a flood of people came into the venue. People that showed up 20 minutes early were left hunting for seats! Night Folk opened with some really fun songs, I remember one about male strippers at a Dairy Queen, but that's another story. We played our new songs at the top of the set and even received a standing ovation on the song Land of Plenty. So it appears that we may be naming our new EP "Land of Plenty". A big thank you to Gary (video) and Michael (audio) for making us look and sound so good. And of course, thank you to the boys in Night Folk for the invitation!