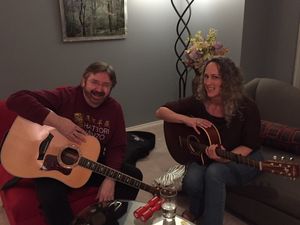 Bryan Emerson asked Kelly and Woody to write a love song for his wife Anne. So we set up a time to get together and talk about it. Although we knew that Bryan was a musician and played a mean guitar, we were a little surprised when he showed up with his Breedlove acoustic. Bryan told us that he had been experimenting with an open tuning and wanted to show it to us, just in case we were inspired. The tuning was D-A-E-F#-A-E, and Bryan showed us some progressions and chord shapes that he had worked out using this tuning. Bryan was obviously in love with his wife Anne, and said that she reminded him of a museum of fine art. So, art, picnics at a local winery with their kids and friends became the basis of the song. Kelly asked the best question when she inquired if he had a pet name for Anne, and he told us yes... it's Annabelle.