"Radio Stranger Are The Real Deal." 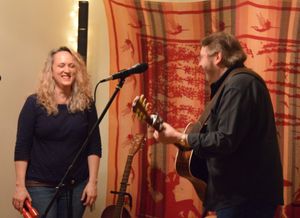 Radio Stranger recently performed at Two Blue Roses House Concert Series in Eugene, OR, hosted by V.P. of FAR-West, Jeanette Lundgren. We had such a great night; Harmonies super tight, awesome dynamics, fantastic audience that were not afraid to sing along. We we also joined by amazing Eugene songwriter Phoebe Blume. After the show, this is what Jeanette had to say about the Brightwell & Moran performance.

"Radio Stranger are the real deal.  This is fully revealed when they hit a live stage, captivating the audience right from the very first song.  Tight harmonies; meaningful memorable melodies, lyrics and songs; audience rapor; and an impressive stage presence. Their show at Two Blue Roses in Eugene Oregon was outstanding and I can't wait to be able to book them again.  Radio Stranger are a high quality, high energy performing duo." Jeanette Lundren, Host - Two Blue Roses House Concert